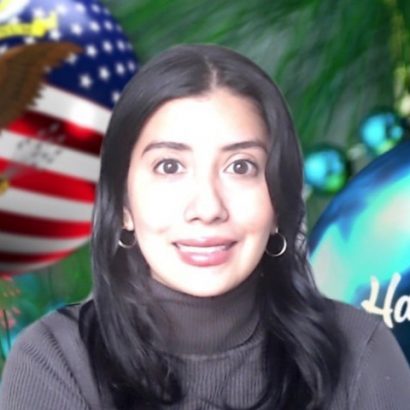 All articles
Life at Zoom

Every year, the United States observes Hispanic Heritage Month from September 15 – October 15. Here at Zoom, our Latinx employee resource group Somos Zoom organizes fun, educational events and inspiring conversations to honor the culture and accomplishments of Latinx Americans. This year’s Hispanic Heritage Month theme was “Somos Zoom, Somos Unidos,” or “we are Zoom, we are united” in Spanish and Portuguese. From in-person activities celebrating the vast food culture of Latin America to virtual discussions with Latinx leaders, “Somos Zoom, Somos Unidos” demonstrated the array of achievements Latinx Americans have made and continue to make.

Here are some highlights and learnings from this year’s Hispanic Heritage Month celebrations at Zoom.

Show up as your authentic self in the workplace

This year’s virtual programming kicked off with a conversation with Cecilia Muñoz, former director of the White House Domestic Policy Council in the Obama administration — the first person of Hispanic descent to serve in the role — and author of “More Than Ready.” A daughter of Bolivian immigrants, Cecilia’s identity and life’s work are inextricably intertwined. When asked how she brings her heritage to work, Cecilia said:

[My heritage] is everything I am. There’s never a day where I’m not the daughter of Bolivian immigrants or the wife of an Indian immigrant. It’s an identity and an area of expertise — I know my community, and I’ve worked in it. I wrote ‘More Than Ready’ to help Latinx people understand that they belong in the rooms they’re in earlier in their careers. When we’re in a room, it’s important that we’re there. The experiences we bring are essential. There are reams of evidence that support this.

Cecilia also spoke about the significance of Hispanic Heritage Month and diversity, equity, and inclusion programs in the workplace. For Cecilia, Hispanic Heritage Month is “an opportunity to remember who we are” and bring people of both Hispanic and non-Hispanic descent into the fold, spreading awareness about the invaluable contributions Latinx people have made across sectors and history. When colleagues, regardless of background, acknowledge, respect, and praise this history, companies are inevitably more successful.

“You’ll be more successful and make the workplace more hospitable,” she said. “If we can feel at home at work, we’ll do our best work.”

Prioritizing diversity, inclusion, and belonging starts at the top

We also had an inspiring conversation with Guillermo Diaz Jr., a transformative global business leader and champion of diversity, inclusion, and belonging. Formerly the chief information officer at Cisco Systems, Guillermo currently serves as the founder and CEO of Conectado Inc. and the chairman of the Hispanic Technology Council (HITEC) and sits on the board of directors for Blue Shield of California and Jack in the Box.

Growing up in Pueblo, Colorado, Guillermo was not exposed to the opportunities in technology and business that he later worked hard to earn and create for himself. Despite that, his grandmother would ask him, “someone is going to change the world, so why not you?”  This question became a driving force in his life, not only for his success but for giving back and helping others.

Having been CIO at a major global technology company and now CEO of Conectado, Guillermo recognizes how important DIB initiatives are to increasing Latinx representation in the tech workforce.

“It’s great that we’ve united diversity, equity, inclusion, and belonging, but these initiatives amount to nothing without the right people and culture in place. The people make the culture and the technology. As a CEO, you must walk the walk and show through your actions that DIB initiatives matter to you.”

Learn to love the journey — even the rejection

Somos Zoom also spoke with Jose Hernandez, a former migrant farmworker turned NASA astronaut. Jose imparted upon Zoomies wisdom about enjoying every aspect of the journey to achieving your dreams — even the rejection.

I received 11 rejections from NASA before being accepted into the astronaut program on my 12th attempt. The first six rejections were what I call ‘passive perseverance’; I didn’t give up, but I didn’t change anything about what I was doing to get to where I wanted to be. The sixth rejection was particularly discouraging, and I almost gave up. When my wife asked me if I was a quitter, that motivated me to keep going, and her last words in that conversation were, ‘I don’t know what they have that you don’t.’ That statement made me go from passive to strategic perseverance. I researched who was getting into the program and their credentials, and invested in myself and became the applicant NASA was looking for. I wouldn’t say that I enjoyed the rejection I faced, but I recognize that it was part of my journey, and I’ve enjoyed every aspect of the journey that led me to be the first migrant farmworker astronaut.

When speaking about how his Hispanic heritage has shaped him, Jose talked about the blessing of being bicultural. “When I was growing up and would visit Mexico, the kids there thought I was too American. At home in America, students noticed I spoke with an accent and thought I was too Mexican,” he said. “I realized this was a blessing, not a curse, when I was 16. I embrace my bi-cultural upbringing, and I’m proud of it. I get to take the best part of both worlds and use it to define who Jose Hernandez is.”

Reframe imposter syndrome as the discomfort of growth

The culminating “Somos Zoom, Somos Unidos” Hispanic Heritage Month event featured Lolita Taub, General Partner at Gaunus Ventures, a venture capital fund investing in Web 2 and Web 3 community-driven companies in the U.S. and Latin America. Lolita is the daughter of dairy farmers. She was exposed to and fell in love with the world of technology on an academic trip to China in college.

Upon completing her undergraduate education, Lolita worked for IBM, where she found a supportive network in the IBM Latino Association. Through her work at Cisco and membership in the association, she realized that she wanted to become a check writer, backing innovation and Latinx leaders in tech. “We need us to build the product and features for us,” Lolita said.

“The work I do is humbling. It’s an honor to serve and be invited to serve,” she said. “I don’t forget where I come from. I’m always thinking about how we can win together.”

Being only one of a few Latina women that make us the less than 2% in VC and tech — for now — Lolita was asked if she ever suffers from imposter syndrome. “I try to move away from that framing,” she said, “and think of any discomfort as growing pains. Trailblazing can be scary, but the feelings come from being one of the first.”

What Hispanic Heritage Month means to our Zoomies

Hispanic Heritage Month means honoring the journey and sacrifices made by my family to put me in a position to be here at Zoom today. I love celebrating and learning about the diverse cultures within the Latinx community. As the daughter of an undocumented immigrant, I rejoice in the opportunity to meet with, learn from, and celebrate minha família.

I’m Hispanic & Native American, and I get so excited when Hispanic Heritage Month comes around because I know it means I can celebrate and uplift our culture with my fellow Somos community. We can be both proud and loud by honoring our ancestors’ wonderful contributions, sharing stories, and celebrating who we are and how far we’ve come as a Hispanic & Latinx community.

Being Latina is one of the things you can’t take away from me, and I am very proud of it. I love my heritage, and I always want to make sure other people understand that there are no limits to achieving their dreams. My Latin roots, past, family, and culture have shaped me into who I am today. I joined Somos to support and encourage the LatinX Community to thrive despite their circumstances and make them understand that being Latino is part of what makes us unique.

It’s a time of year when I have the opportunity to lead with my Hispanic heritage in conversations. I don’t “look” Hispanic to many folks, but I’m first generation on my mom’s side. She was born in Mexico, and I’m incredibly proud of my family history when I tell people about how my grandparents came to the U.S. and worked in the orchards and canneries that used to make up a lot of Orange County, CA decades ago. My grandmother worked her way up from being a janitor to the head of housekeeping in a hospice facility – she was very proud of that, and so am I. My children are in bilingual immersion programs because it’s a huge priority for us that as “Hispanic” has less of a defined look these days, and as hispanic culture continues to shape a lot of U.S. culture, my kids have a way to identify with and embrace their heritage through both the language, and HHM.

Zoom looks for the best and brightest talent from all walks of life. Check out Zoom’s career page to explore our openings, and learn more about our company culture on our blog.

Life at Zoom
Giving thanks: what our Zoomies are grateful for in 2022