Check out our Privacy Policy.
The Benefits of Having Small Teams in Zoom Meetings
July 7, 2015 by Zoom 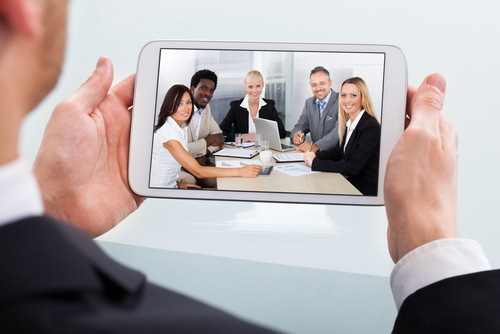 How many times have you been sitting in a room with many people and the ideas you’re trying to express are drowned out in a sea of other ideas? This frustration is common in very large groups of people. We at Zoom love to see people use our product as much as possible, but more than that, we want to encourage them to use it as productively they can. There is a time and a place for huge 200-participant meetings or 3,000-person webinars, but there are also other times when small groups work best. An educational setting, for example, often does very well with large groups of people, since there is usually one person lecturing and others asking questions. The same goes for large company meetings where one person is giving a presentation. In a decentralized brainstorming session, however, having large groups of people may be counter-productive.

Some of the greatest things happen when you choose to have a meeting with a more selectively-drafted team. Here’s why:

Too many cooks in this kitchen!

Everyone gets a turn.

As a group grows larger, so does its complexity. Everyone has something to say, and not everyone can wait their turn. Being in a large group, a person may grow anxious as to whether they will be able to attract the attention of others. The only logical conclusion that comes to mind for many is that they must butt in as quickly as possible with what they have to say. Conversely, having a group of, say, 8-10 people in a meeting creates the impression to each participant that they will get their turn eventually.

You don’t want your group to become a hive mind with a queen bee on the upper rung of the ladder, but you also want to avoid turning the group into a chaotic beach party. If you want a decentralized brainstorming session, you need a small group of people with a diversity of ideas. Operate on the principle of “too much of a good thing is bad.” Yes, having a diversity of ideas and voices can be conducive to the development of projects. But too much of this diversity can lead to anarchy.

It’s easier to keep smaller groups focused. You can easily reel in a conversation back to its original subject, or steer it in a direction that can explore a related concept that may expand into something awesome. Speaking of which…

It gives rise to big ideas.

Think of all the major scientific research that has been done in the past. Most of it was coordinated by a small group of individuals. There may have been many people working on that particular goal, but the shots were called by a couple of higher-ups. Large companies tend to function in this manner, having only a handful of executives out of thousands of employees in their roster. Some of the biggest ideas always come from well-organized discussions inside of a small group.

This happens because a more consolidated group of people has an inclination to step outside the smaller details in one particular concept and analyze said concept as a whole. The pieces should be assembled after the outline has been laid out. Having too many people in a group will lead to distractions from this type of organizational structure and will instead veer the entire discussion off into smaller “compartments.”

But how do you manage an enormous project with Zoom?

In an ideal situation, you’d have one group doing the central planning and coordination of the entire project, deciding what proposed pieces should be included and which ones aren’t a top priority. Then you assign different teams to work on each of those components and discuss how each mini-project should be carried out. Through delegation, you can still accomplish a lot with small teams. Instead of looking at a large project as a single entity, it should be viewed as a group of many smaller projects, each with its own team to coordinate its completion.

Zoom works wonderfully in the brainstorming process since no one has to wait for the moment when everyone’s available in one place. Technically, the meeting can take place even if everyone is on different trains heading to different endpoints. Zoom doesn’t care where you’re located.