Check out our Privacy Policy.
From Late-Night Talk Shows to Musical Renditions to ‘Saturday Night Live,’ Zoom is Where It Happens
April 17, 2020 by Janine Pelosi 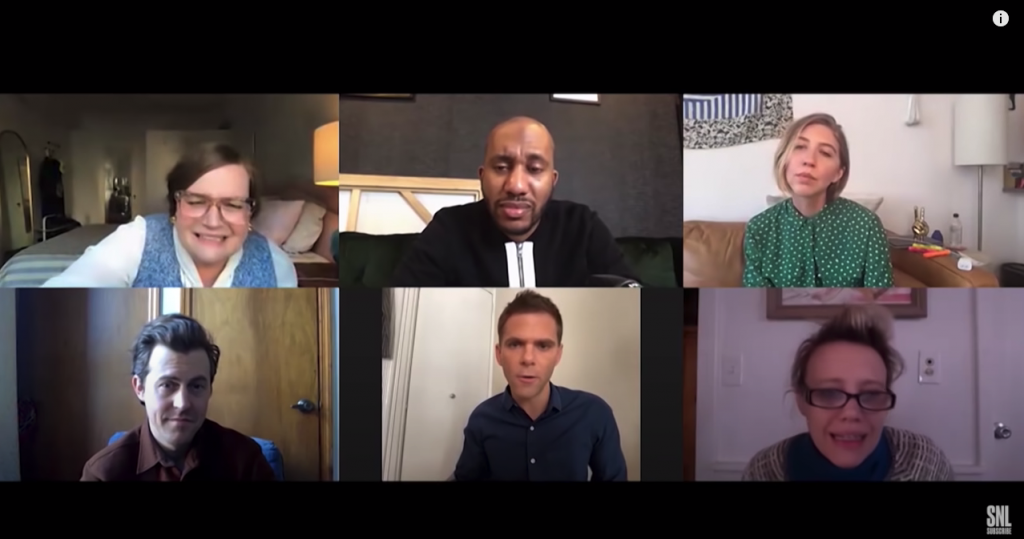 We’ve been so touched, thrilled, and just plain amazed by how many people have turned to Zoom during this time of social distancing and stay-at-home mandates. We love that Zoom is able to keep people connected, and we also love that Zoom is being used to create original content and keep people entertained.

If Zoom can help restore some sense of normalcy during these difficult times, we’re all for it. Here are some of our favorite Zoomers from the world of entertainment.

“Live from Zoom, it’s sometime between March and August!” We could barely believe all the Zooming happening in the all-digital “Saturday Night Live” on April 11. The remote episode featured Tom Hanks hosting from home and Coldplay’s Chris Martin as the musical guest. We loved the “Zoom Call” sketch, and the Weekend Update segment with a Zoom audience was such a nice touch!

Whether you know him as Jim from “The Office” or as Jack Ryan on Amazon Prime Video, John Krasinski is sharing so much good news via Zoom. Krasinski even arranged a special Zoom birthday chat with some surprise guests:

“The Zoom Where It Happens” (“Hamilton” parody)

The former “Parks and Rec” stars and current “Making It” co-hosts recently updated fans via Zoom on a potential new project. (We love Nick’s virtual background!)

So many late-night talk shows are using Zoom to keep us all entertained and also informed. Most are sharing the opportunity with their celebrity guests to donate to charities like Feeding America, Food Bank for New York City, and Direct Relief to help people in this time of need.

“The Tonight Show with Jimmy Fallon”

Jimmy Fallon has been using Zoom for many of the segments in his “at home” editions. Fallon Zoomed in former “SNL Weekend Update” partner Tina Fey and used Zoom to hang out with Lin-Manuel Miranda.

Fallon has also done some AMAZING music renditions with his house band The Roots. Here’s a remix of “Don’t Stand So Close to Me” featuring Sting himself!

And a fun rendition of “Stuck in the Middle With You”:

“The Late Show with Stephen Colbert”

Colbert talked with Oscar-winning megastar Matthew McConaughey about the University of Texas classes he’s teaching over Zoom. “Professor of Practice” McConaughey even shares some tips he’s learned for up-leveling his Zoom game:

TBS late-night host Samantha Bee has been hosting from her backyard and connected with former presidential candidate Elizabeth Warren in a spot called “The Elizabeth Warren Emergency Reassurance Zoom.” At one point, Bee jokingly asks Warren about her calm demeanor: “What, do you have shares in Zoom or something??”

We hope these were as much fun for you as they were for us! We’ll also be sharing other great stories of how you’re creatively using Zoom for healthcare, government, and education. Subscribe to the Zoom blog at the top of this page to get new posts sent right to your inbox.

In the meantime, stay safe out there!